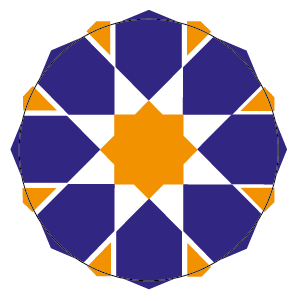 Towards trance and beyond – or how Gnawa rhythms and songs are reinvented in contact with Afro-beat, free music, reggae or ethio-jazz. 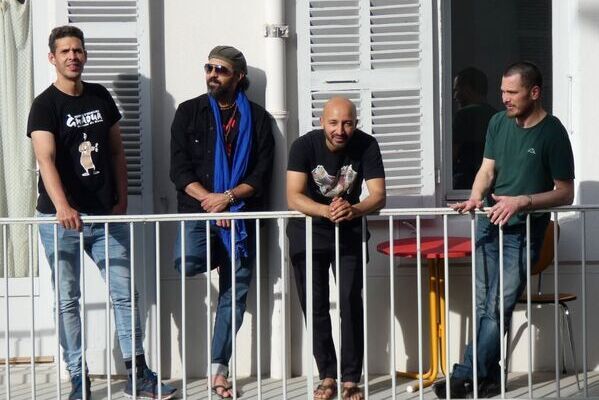 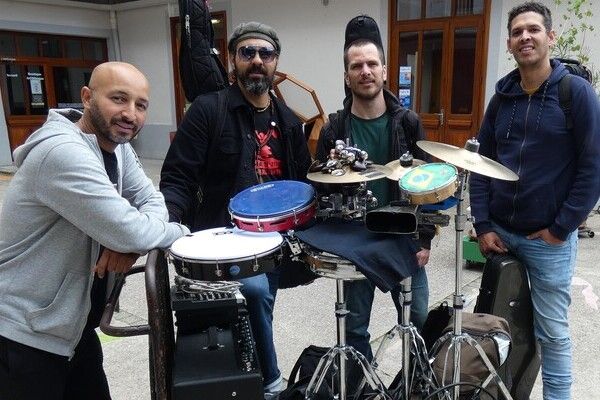 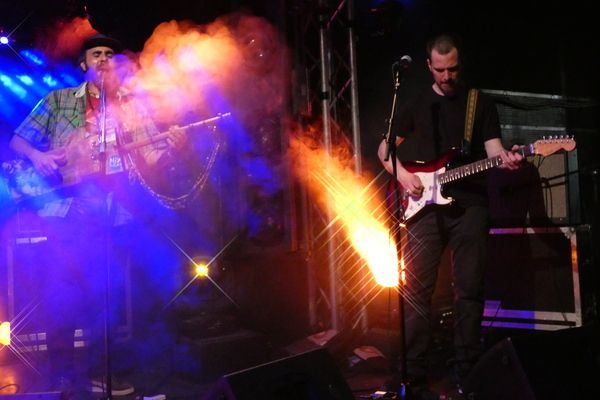 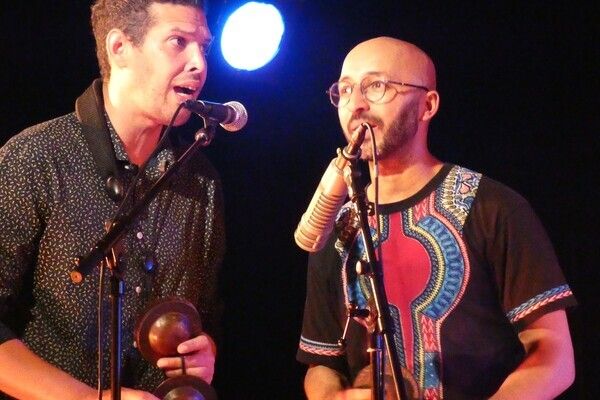 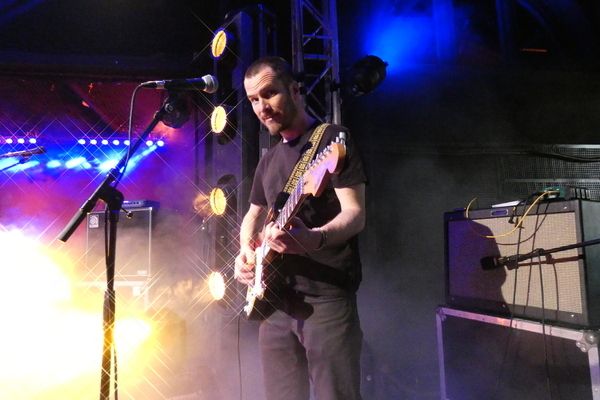 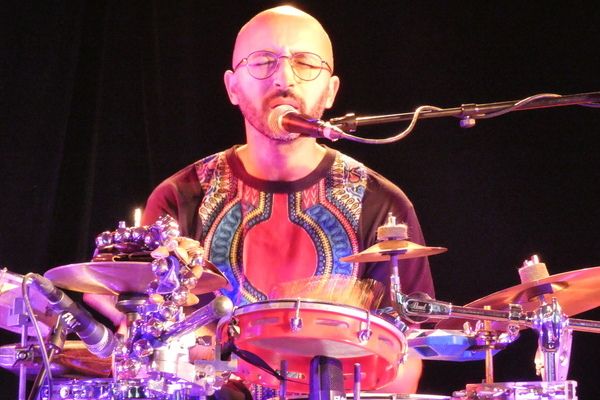 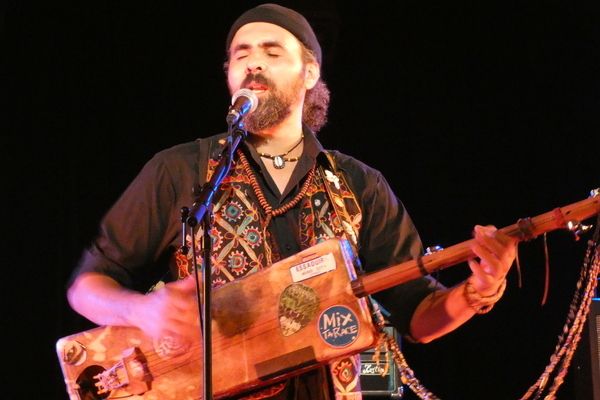 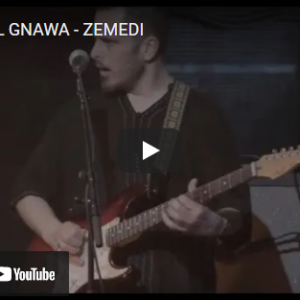 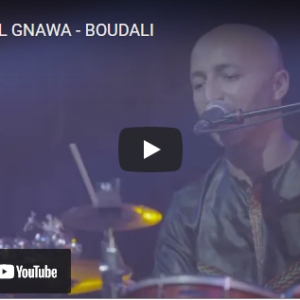 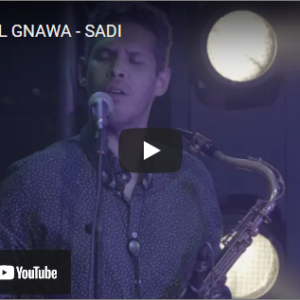 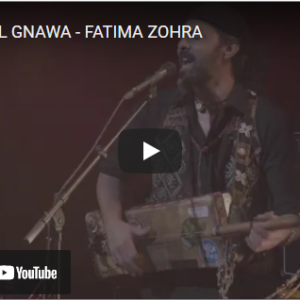 Global Gnawa was founded in 2009 and is the meeting of Jaouad El Garouge, Thierry Fournel and Mehdi Chaïb. They are talented musicians (and accomplices) deeply at the service of an authentic music, rich in improvisations and open to other musical meetings. Global Gnawa uses delicay and a strong sens of improvisation to weave new links between Gnawa rituals music, jazz and the particular universes of each of the musicians.

Global Gnawa develops arrangements and compositions exploring the ancestral Gnawa rhythms and songs (traditionally brought from West Africa to the Maghreb) in all their spiritual and harmonic dimensions. Jaouad El Garouge‘s haunting chants find an echo in the musicians’ chorus and invite the audience to join in. Global Gnawa‘s musical research is anchored in the meeting of this heritage with jazzy flights of fancy carried by the free-jazz energy of Mehdi Chaïb‘s saxophone, but also by influences of afrobeat, reggae, or ethio-jazz. The musician-researcher Thierry Fournel offers a very subtle playing animated by electric guitar solos with a certain groove.

Jaouad El Garouge‘s guembri (3-string gut bass) guides and federates all the traditional or more modern instruments in a dialogue that inexorably leads the audience to trance, dance and transcendence!

Global Gnawa, has just integrated the excellent percussionist Adhil Mirghani to form an explosive quartet and proposes from 2022 its new show Magic Rainbow.

Arrived in France from Essaouira in 1999, he created his first group – Gnawa Experience (traditional gwana) – with which he performed on several stages in France. This adventure made him want to open up to other musical styles. In 2000 he met Nuru Kane, a Senegalese musician, with whom he made 3 albums and several international tours: Sigil in 2002 (nominated for the BBC Awards – New coming), Number One Bus in 2010 and Exile in 2013 and many gigs in Europe and Africa. At the same time, he created the band Kafila which mixes gnawa and brassy jazz with which he performed on small and large stages in France, including Jazz à Vienne in 2008. He formed in 2009, with Thierry Fournel and Mehdi Chaïb, the band Global Gnawa, in the continuation of this search for gnawa and jazz fusion. He composed with this band the album Zemedi in 2010. He has also participated in many other projects including : Lokuttara of gnawa and slam with Reno Simo, Trans Trapeze with Jane Allan a meeting between the world of circus and trance gnawa, Jil Gnawa: traditional music and music therapy ceremonies gnawa), Salif Keita: recording of 2 tracks on the album Tale in 2012.

Thierry Fournel is a guitarist, oud and n’goni player. He took part in numerous jazz and funk projects. After that he decided to travel the world to meet other musical cultures… other strings! This journey gave birth to two records, signed to Ocora Radio France, which retraced his ethnomusicological search carried out in Ethiopia (Ari polyphonies in 2003) with the Aris and with the Peuls from Mali (Hoddu Peul in 2006). Nourished by these travels and many influences (jazz, afro-beat, world music) he composed, arranged and performed on many stages in Europe and Africa with, among others: Nuru Kane and his Senegalese band Bayefall-Gnawa (Sigil 2004, number One Bus 2009, Exile 2013), Gaada Diwane Bechar (Algeria, Mah’ Low 2012), Mam’Sika (Bascule 2010) formation of the Franco – Beninese singer Sika Gblondoumé and Global Gnawa (Morocco – France). He also plays, for several years with Bania (fusion with the Algerian Diwane) and often accompanies Mamani Kéita (Mali).

Mehdi Chaïb studied classical saxophone at the conservatory from an early age, bathed in warm winds and virulent grooves. Searching for the continents’ sounds, the gnawa harmonies, the percussions, the singing, the complex metrics, he participated in numerous album projects, creations, bands from every horizons: Omer Avital, Jazz Liberator, Hamid Khan, Doudou N’Diaye Rose, Hamid Bouchnak, Zetlab, Nuru Kane…  At 35 years old, he improvises the lyricism that heats up with the slammer Dgiz, he plays the very written music of the flutist Naïssam Jalal in a very sensitive and attentive way. He plays the party, which is spiritual and playful with the gnawa and colorful and boisterous with Fanfaraï. Soprano and tenor saxes, karkabas, bendir, ney or derbouka on his back, he travels the streets, stages and festivals: WOMEX, Villes Des Musiques du Monde, Jazz sous les Pommiers, Sons d’Hiver, Les Suds à Arles, Jazz Nomades, Babel Med, Sziget, Mawazine, Hip Opsession; Ethno Port Poznan… in search of passionate musical encounters.

At first, he appropriated the Maghreb culture in Africa which is mixed and musically rich. He invokes traditional percussive instruments, derbouka, bendir, djembe of which he sincerely hits the skins with a whole, pure gesture. At the age of 10, he created his first group with his brothers and a friend who was drumming on waste paper baskets at a neighborhood party. His career started with an inter-suburb tour in Blois. Self-taught, he recorded two albums with a family musical adventure Sawt El Atlas. This made him learn his job and forges his style nourished with jazz, with world musics, with funk and reggae. One time leading to another, Adhil confronted his hands with other skins, bongos, congas, cajon. The whole world is represented on his percussion stands. He comes heart and hands united in studio and on the scenes of the whole world sharing the rhythms with the « big ones »,  those even which inspired him: Aziz Sahmaoui, Marcus Miller, Mokhtar Samba, Jane Birkin, Kent, Enzo Enzo, Akli D, Malika Zarra, Gnawa Diffusion, Oum, Nuru Kane, Toumast, Houria Aichi, Juan Carmona, Ninio Josèlé, the Leipzig Philharmonic Orchestra, and so many others… for 20 years hands are dancing.

« In this dancing mix, traditional Berber instruments (guembri, karkabous) rub shoulders with the oud, the n’goni, the guitar and the jazzy sax, very free, quite galvanizing, by Mehdi Chaïb (…) this festive trance accommodated with afrobeat, reggae or ethio-jazz sauce, whose Métis groove invites you to dance. »

« Here, no sweeping fusion, no artificial and clever cross-over, but a common will to find diagonals, tangents and other musical lines of flight allowing to connect these ancestral rhythms and songs to the spirit of free jazz as well as to the palpitations of afro-beat, the melodies of ethio-jazz as well as the pulse of reggae. A unique way to transcend trance, quite simply. »

« Made of reggae, ethno-jazz and gnawi, the fusion of » Global Gnawa « quickly caught the audience audience by the harmony existing between these styles enriched by energetic percussion or balafon melodies, designed to dress up songs of gnawa music known to all. »

The band is based in France and available on request for concerts, workshops and pedagogical encounters.