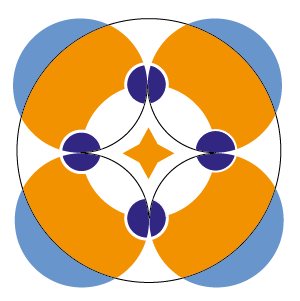 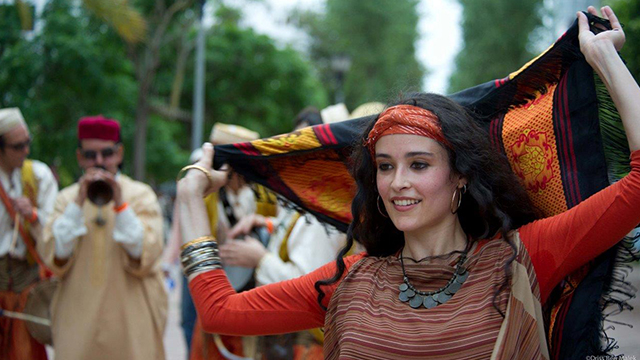 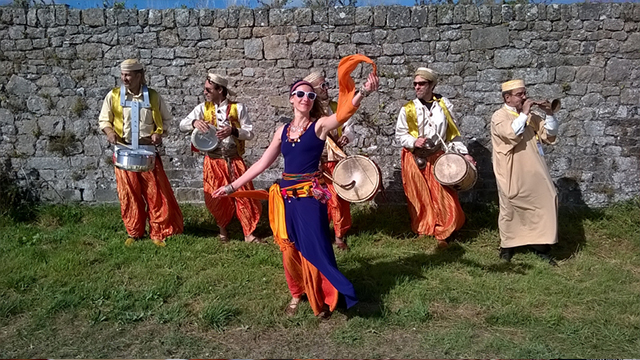 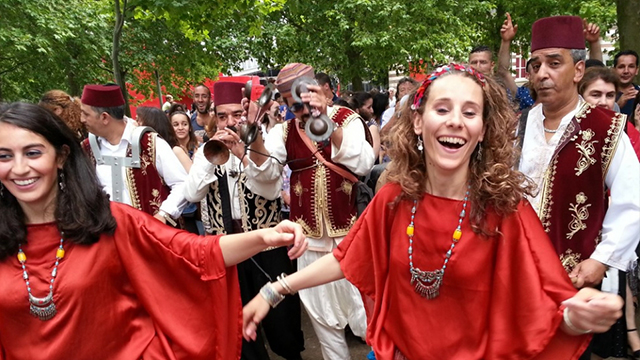 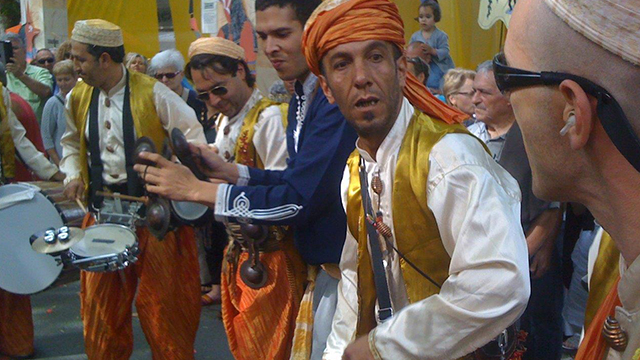 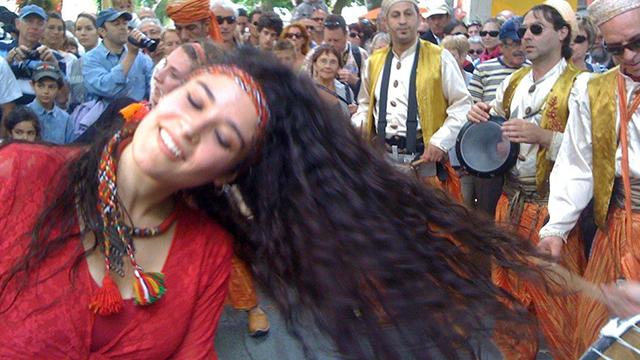 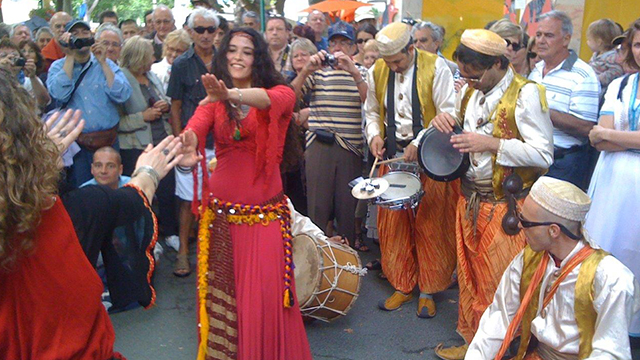 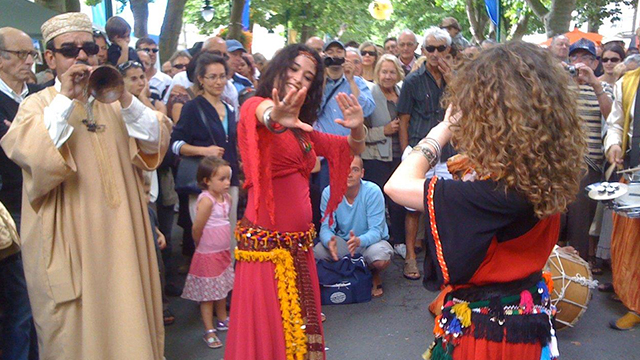 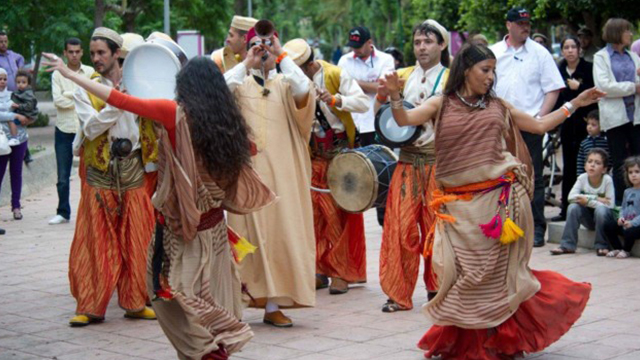 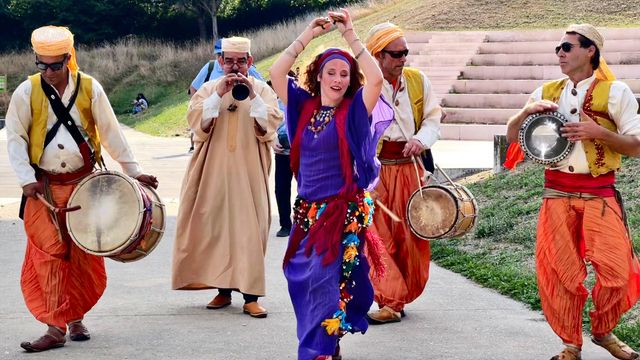 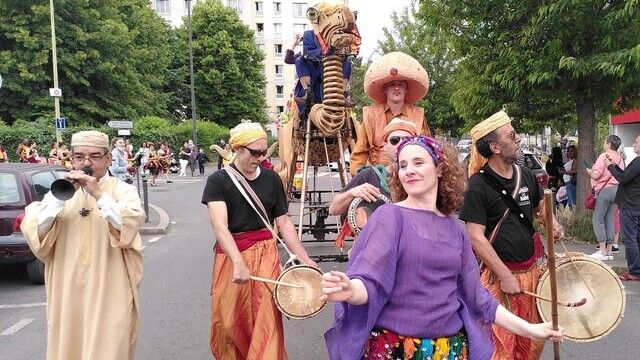 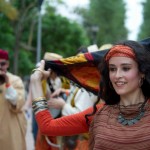 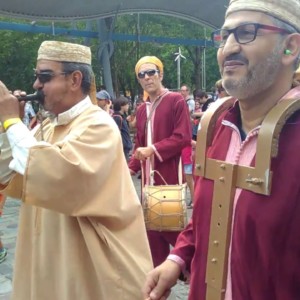 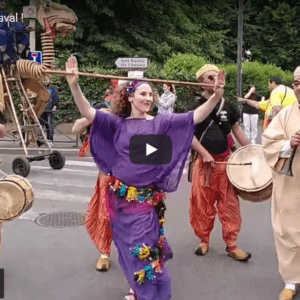 Algerian Traditional Street Band, Ziyara transports you through the rich directory of the popular musics and dances from the Maghreb and the Middle East.

Founded in 2000, in the Paris region, by percussionist Samir Inal and several musicians with multiple influences (Berber, Gnawa, Arabo-Andalusian, Turkish, Balkan music, or raï), Ziyara (« the visit » in French) is the promise of a resolutely festive musical moment.

The group takes you on a journey to discover the melodic gems of the Maghreb and the Middle East, revisiting through music and dance the atmosphere of religious ceremonies or important events, such as weddings or baptisms, in the Arab-Berber world.

The zorna, or ghaïta (a kind of bombard), a peasant music instrument whose origin in the Maghreb is lost in the mists of time, and the ancient percussion instruments (tbel, bendir, guellal, derbouka, tarija) or more modern (snare drum) combine to give rhythm to the dancers on repertoires Allaoui (traditional raï from western Algeria), Gourari (music from the Gourara region in the Algerian Sahara), Kabyles but also the Debka from the Middle East, the Egyptian Sâadi, the Saudi Khalligi or the Tunisian Fezzani.

The haunting and hypnotic tones of the ghaïta animated by the continuous breath of the excellent instrumentalist El Hadj Khalfa, the ancestral rhythms of the percussions as well as the call of the dance carry you inexorably in a carnivalesque and shimmering universe of colors!

Let yourself be immersed in incensed places for an allegorical and bewitching journey. Ziyara accompanies you in the discovery of the diversity of the melodic jewels of the Arab-Berber world.

Masterclasses and workshops discovering rhythms and dances of the Maghreb.

« Ziyara presents a mixed show offering a Brazilian batucada atmosphere under the charm of the middle East, in which musicians and dancers merge to take you away in the rhythmic intoxication of street parties on Egyptian music with Bulgarian accents and Kabyle melodies with Gnawa turns. »

« In a festive and warm atmosphere, this fanfare explores the rich repertoire of popular music and dance from the Middle East and the Maghreb. »