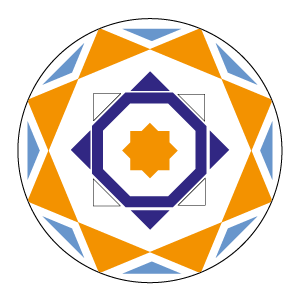 The urban voice of the desert
Southern Algeria’s flagship artist 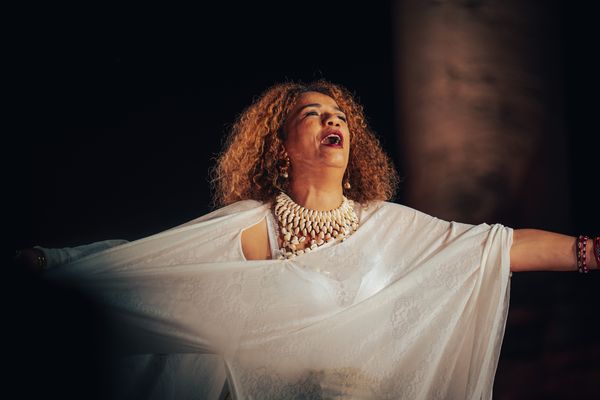 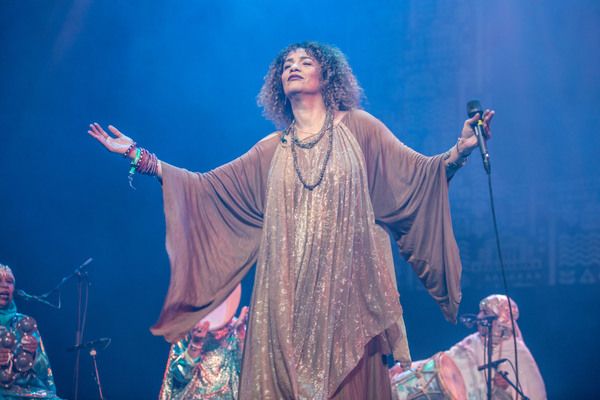 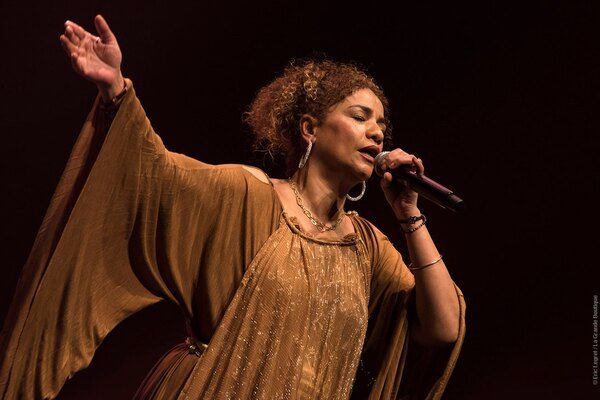 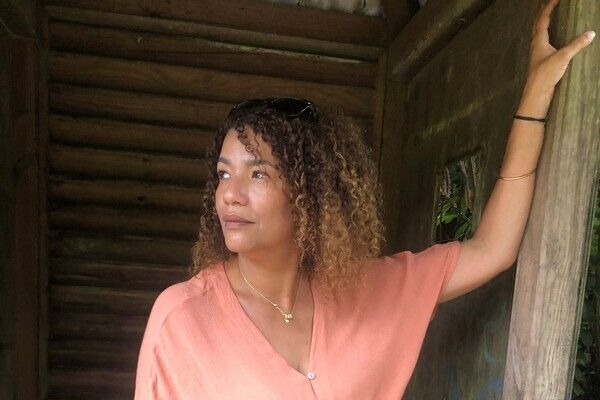 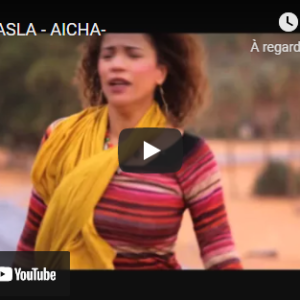 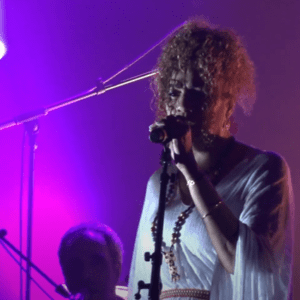 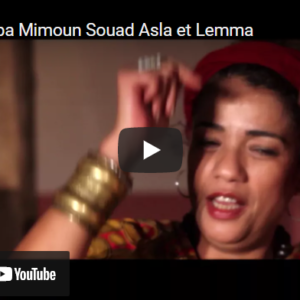 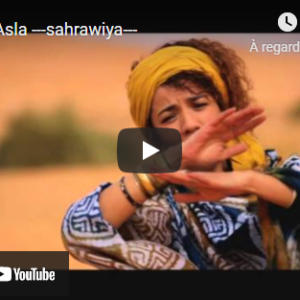 « Each of my songs is an invitation to travel »

The new generation of Southern Algeria’s flagship artist, heiress of the Gnawa tradition and its trances that heal the souls, Souad Asla overflows with talent and humanity. Her voice takes us to the gates of the desert. Her music is a great cultural melting pot and carries a strong identity as much as a rebellious spirit that lets us get a glimpse of the future.  Whether with Jawal – her own project, with the band Lemma that she is the frontwomen since 2017, or more recently with Sahariennes or Les Héritières – a creation in tribute to Cheikha Rimitti, she involves the public with her at each concerts in the tireless atmosphere of the Lila with a radiance and an impressive generosity. With her fellow musicians who accompany her with percussion, guitar, bass and keyboards, they end up becoming one with the audience.

Souad Asla is born in Béchar, in the Algerian Sahara which in the heart of the Saoura region and 800 km from the Mediterranean coast. This city is at the crossroads of rich and mixed musical currents, where Bedouin music and Berber tempos have been influenced with Gnawa’s African music because of an history marked by slavery. The Gnawa music is a fight, the claim of a strong identity which was never forgotten. We can find this spirit in her. In France, Souad began to concretize her musical inspirations after she obtained a degree in biochemistry. In 2002 Souad started, with Hasna El Bécharia (The « Rocker of the desert ») a fertile collaboration as their ancestral culture ambassadors. They toured together in the whole world during many years. In 2003, the association 20 years Baraka brings together artists from all horizons, including Barbara Luna, Hasna and Souad. They recorded a CD against the unfair Algerian civil code. In 2004, she met Gnawa Spirit, a 100% Moroccan band with whom she will collaborate. This meeting made her realize that she can revisit traditional Gnawa rhythms with modern vision and instruments to release the most energy. During a concert in Mexico, the press unanimously recognized that Gnawa Spirit possesses « a groove of a rarely felt strength ». Over time and through musical encounters, Souad Asla has forged a strong personal musical style and orientation.

In 2006 in Essaouira – the Moroccan capital of the Gnawas – she met a Gnawi master, Maalem Boujmaà, with whom Souad learned the gumbri and composed three songs that share her rebellious spirit: Marchandize which denounces the abuses of the music industry, Jabouna is a revolt against the living conditions of Sudanese slaves from which the gnawas come and Salamo a message of peace, which shows us how hard it is for men to make it exist. Six years later, these three tracks have been integrated in her first album, Jawal, released in 2012. In this album, we can also find the songs Zawali, which highlights injustices or La patera, which mentions the story of these young people who take makeshift boats to cross the Mediterranean sea. Her music is very inspired by her childhood in Béchar’s traditional and popular music, but Souad is also influenced by other music styles, such as blues music or African music that she likes particularly.

Souad is nomad and is interested in people. She nourishes the desire to collect the ancient texts and rhythms.

Throughout her returns to her native region, she noticed with dismay that the traditions and transmissions were lost. This awareness maked her decide in 2015 to bring together women who still carried these legacies and created the band Lemma.

« My dream is to take a recorder and to travel in every part of the desert to collect all the texts. I do it on a small scale. It is necessary that people become aware of the treasure that we have. Our music is healing music. »

Workshops of vocal and physical expression led by two artists: Souad Asla, author-composer-performer and Mounira Yagoubi, dancer-choreographer. They both are impregnated with the Algerian Sahara's cultural traditions and strongly attached to their transmissions. Find out more 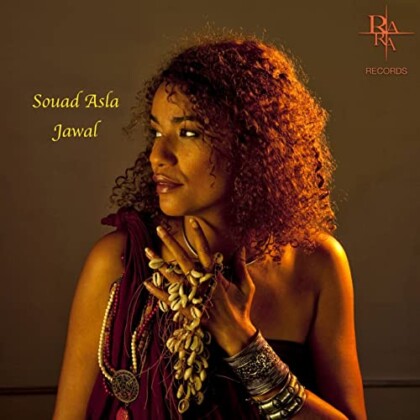 « Artist flagship of the Algerian South’s new generation and heiress of the gnawa tradition, Souad Asla is beautiful, generous, sensitive and communicative. She overflows with talent and humanity. Her voice takes us to the gates of the desert from where she followed Hasna el Becharia, but her music, which is rich in diversity, lets us get a glimpse of the future. »

« Through her album Jawal, Souad Asla reveals her commitments as in the tracks Zawali, Saharawia or Salamo – this last song is a message of peace and a tribute to Palestine. In the song Saharawia she mentions her origins, the beauty of the Sahara, the freedom and generosity of the people of the south… A beautiful song inspired by the African sounds you can hear in sub-Saharan Africa. « Aicha » gives to this album a fresh momentum that is electrifying with a change of pace that is slow at the beginning and carries everything with him in a wild and liberating rhythm! There is no doubt that Souad Asla is an artist who carries struggles that highlight the condition of the Sahrawi, Algerian and African woman … all of this in music! »

« They’re not afraid to play the forbidden guembri nor to defy their family to be heard. Souad Asla and the scandalous desert rocker Hasna El Becharia can move mountains and deserts to share this sublime trance that heals the soul. A dozen women from southern Algeria join them in the Lemma Orchestra. A concentrate of feminine power and humanity to be discovered absolutely. »

« Profane or sacred traditions, Berber, Touareg or Gnawa heritage, their music belongs to a large family. By creating new ways of doing music these women show an artistic solidarity that makes us forget the daily bad news or geopolitical problems. The concert of these four exceptional singers, united for the first time in a common creation, will be given in the great hall of the Opera of Lyon on June 3. »

« Colors from Tagnaouite, influences of the Algerian southwest’s music, sounds from elsewhere and texts which express reality with room for dreams and hope for better tomorrows… these are some of the inspirations which we find in Jawal, Souad Asla’s first album. This album tells the story of an artist who travels from one universe to another and who is inspired by her meetings. »

Artist based in France and available on request for concerts.